The Inverted U theory was developed in 1908 by Yerkes and Dodson and it is a theory of arousal that considers that optimal performance occurs when the performer reaches an optimal level of arousal. 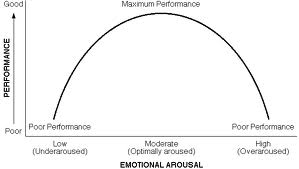 In respect to the first question, research explains many reasons why beginners are not able to perform as strong as experts as levels of arousal increase:

Therefore beginners normally perform better with lower levels of arousal than an expert would need, although they still need to reach the optimum level of arousal to ensure that optimal performance is likely to occur.

The optimum level of arousal can also vary in relation to the skill being performed. Performers that are involved in activities that incorporate major muscle groups or in a gross skill such as weightlifting, may benefit from having higher levels of arousal, whereas performers that are involved in activities which incorporate finer skills such as snooker or darts may benefit from lower levels of arousal. As you can see from the diagram below, even though some skills require higher or lower levels of arousal a performer can still be under- or over-aroused for their particular skill, with a subsequent deterioration in performance 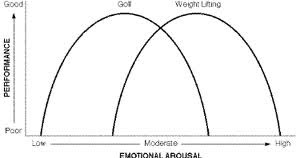 Email ThisBlogThis!Share to TwitterShare to FacebookShare to Pinterest
Labels: Inverted U theory